Detailed step-by-step instructions and photographs will guide you through the following Qigong programs:

Sage Woman (sixty five and beyond): strengthen your heart and bones and maintain balance and agility.

In addition to the age-related routines, the Healing Woman section teaches protocols to address the most common problems affecting women today: 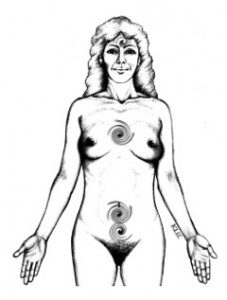 In the early 90’s, Deborah ran a qigong clinic with her teacher Dr. Wang, a qigong master, surgeon, and pathologist from China. She witnessed remarkable Qigong healings such as Roberta who was told that she had only two months to live after undergoing unsuccessful chemotherapy and radiation treatments for breast cancer. With a death sentence looming over her, Roberta dedicated herself to our prescribed Qigong program of qigong exercises, meditation and self-inquiry. She healed herself of cancer within a year.

Deborah’s 75-year-old mothers dangerously high blood pressure wasn’t responding to medication. Her cardiologist was concerned that she’d have a stroke or heart attack at any moment. Deborah designed a Qigong protocol to lower the pressure and regulate her mother’s heart. It took only a month to bring the pressure lower than it had been since her twenties.

QIGONG IS EASY TO LEARN AND SUITABLE FOR ALL FITNESS LEVELS AND AGES. 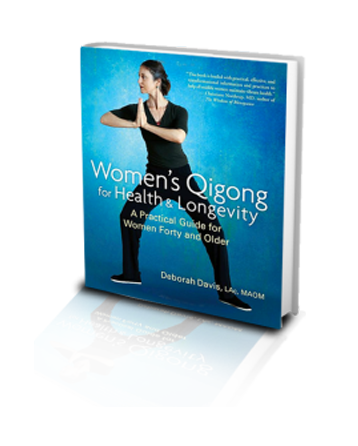 Deborah Davis has gifted Western women with a practical, yet profound handbook for self-healing using the ancient Chinese practice of Qigong. With this guide every woman, no matter her age or health concern, can enjoy the benefits of systemic life force cultivation. Organized by life stage and health concern, Deborah’s guidebook makes it easy to develop an individualized Qigong program.  Having personally experienced the “magic” of Qigong many years ago, I am delighted to see this insightful handbook. As a bone health specialist you can bet I´ll recommend to all my clients to look into Deborah´s Qigong exercises for osteoporosis.

Women’s Qigong for Health and Longevity is loaded with practical, effective, and transformational information and practices to help all midlife women maintain vibrant health.”

Finally! A book on qigong for women by a woman!!! As soon as I received this book and read it,

I ordered three more copies to give to my friends! It’s a fabulous book! (I studied tai chi and qigong for eight years, but had fallen out of practice.) Now, I am starting to practice again, thanks to finding this book. The information in the book is invaluable to women of any age. It’s never too early to start protecting your health and learning to “work your qi” is the best way to start. The book has different routines for different age levels so it can be used for decades! Deborah Davis explains qi and the five element system in a way that is easily understood even without a tai chi/qigong background. I am truly grateful that I have found this book and you will be, too. Buy a couple and share with friends — you’ll be glad you did!!!

Great Book & DVD! As a personal trainer, senior fitness specialist, mind body specialist, tai chi and yoga teacher I am always looking for wonderful things to add to my classes.

Women’s Qigong for Health and Longevity” by Deborah Davis is an excellent choice. The information is easy to understand and relates well to our modern lifestyle. The exercises are explained well and easy to follow. The six healing sounds and accompanying movements are a beneficial addition to any fitness routine or program.   The specialized chapters: Breast Health, Menopause, Depression, Heart Health etc. help each person set up a program specific to their own needs. This is an added bonus.   Deborah’s Dvd “The Spirit of Qi Gong” which contains the six healing sounds and their accompaning exercises is a valuable addition to your wellness library, again it is easy to understand and follow and makes you feel wonderful while doing it as well as when you are finished.   I highly recommend both the book and the dvd to beginners, or those like me who have been practicing for years.

Women’s Qigong for Health and longevity has been a lifesaver for me. I have problems with menopausal symptoms and was diagnosed with osteoporosis.

I have been doing the exercises in her book for a month now and my hot flashes are gone! My sleep has improved and I have a lot more energy yet feel more relaxed at the same time. I’m doing the exercises for osteoporosis too and feel stronger. I got her DVD, The Spirit of Qi Gong which my husband and I do together. We love it and it’s beautiful to watch. Both the book and DVD are a great combo even if you don’t know anything about qigong. I highly recommend this book!

This is VERY informative. Normally, I like audio, but there is so much information and step-by-step that it needs to be in book form. A great instructional reference for those who do Qigong, and women like me who cannot be physically active in any other way but Qigong.

In my mid-50’s with a variety of health issues, a spinal disorder and fatigue, I found this book/dvd combo through a friend.

I’ve enjoyed just opening to a page and discovering personal useful guidance. The DVD is beautiful to watch and easy to follow along with. In just a few short weeks I’ve been amazed at my increased flexibility, stamina, vitality and focus. It’s opened a whole new world for me with energy medicine. I wholeheartedly recommend this Book & DVD to women or healing practitioners who are ready to engage in their own self-healing.

I love this book! I first purchased the video on Qigong by Deborah Davis: The Spirit of Qi Gong- Chinese Exercises for Longevity.

The video is excellent, but I realized I wanted to learn more about Qigong, and this book is a great companion to the video. It gives more detail on the exercises, the benefits they provide, and the theory behind them, plus it includes some exercises not on the video. There are detailed pictures and descriptions for each exercise, and there are also explanations of Traditional Chinese Medicine, including acupuncture and the six healing sounds.

I like the fact that this book is designed specifically for women. I also like the organization of the book. There are separate chapters for certain periods in life. Deborah is a wonderful, knowledgeable teacher of Qigong. I hope she writes another book and produces another video! Do yourself a favor and purchase both the book and video. You won’t regret it!