For the past 25 years, Deborah Davis has practiced various forms of alternative healing: herbal medicine, acupuncture, hypnotherapy, massage, and psychic readings. She received her Masters from Santa Barbara College of Oriental Medicine and is licensed in acupuncture and herbal medicine by the Medical Board of the State of California, the National Commission of Certification of Acupuncturists and the Oregon Board of Examiners.

Ms. Davis is also certified in Clinical Hypnotherapy by the Transpersonal Institute of Hypnotherapy in Los Angeles. She holds a B.A. in Ethnobotany.

In 1990, Deborah began her studies in medical qigong under the tutelage of Dr. Wang, a Chinese surgeon/pathologist and Buddhist qigong master. She learned medical qigong in a traditional apprenticeship where Dr. Wang taught her qigong protocols for over 40 diseases and imbalances, passing along his vast knowledge for Deborah to carry on. She specializes in women’s medical qigong, and authored the book Women’s Qigong for Health and Longevity (Shambhala 2008), along with the companion DVD series.

As part of her apprenticeship, they ran a Qigong clinic in the early 1990s in Santa Barbara, California. Deborah witnessed infertile women become pregnant, cysts disappear, and even terminally ill cancer patients go into remission. Although there were many instances where they witnessed miraculous cures, Dr.Wang’s primary message, and the guiding principle of Deborah’s teachings, is the importance of taking care of oneself and not relying on the medical system for our health. Learning to heal and nurture ourselves through qigong, herbs and intuitive self-healing are the ancient traditions that Deborah shares with women around the world. 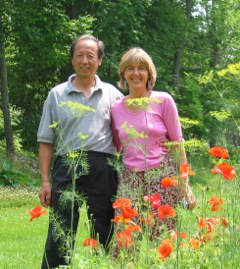 Deborah is clairsentient, clairaudient and kinesthetic so she feels what’s going on in her client’s body. She first became aware of her psychic abilities as a child with recurring prophetic dreams. Many of these dreams were around death, much like her Irish grandmother experienced. As a teenager, she began exploring meditation, yoga and shamanic healing which led to a lifelong exploration of energetic medicine and indigenous practices. She has studied with shamans from around the world and continues the quest to deepen her understanding of indigenous healing and spiritual awakening. Using techniques and wisdom gleaned from years of exploration, Deborah’s workshops on qigong and intuitive self-healing teach others to attune to their inner guidance for deep and lasting transformation.

Deborah Davis has a private practice as a medical intuitive and qigong practitioner in Ashland, Oregon and teaches Women’s Qigong and Intuitive Self-Healing internationally.